On Monday morning of Week 3 I felt like I was starting to get into a good place in the kitchen.  I knew where the ingredients and equipment were, what needed to be requested downstairs from purchasing and how to move around the kitchen with nine other people. Still struggling with multitasking and timing of the convection oven, but I was optimistic those things would come with time. The topic of the day was Pate A Choux (aka eclair paste).  My previous experience with eclairs and cream puffs (mainly grocery store products) had left me seriously unimpressed.  They tended to be bland and cloyingly sweet at the same time. 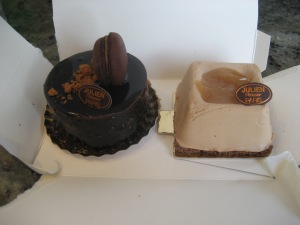 Then in the spring of 2012 we went to Paris for a week and among other great adventures there was the eclair revelation. Chocolate, coffee, pistachio, vanilla…I loved them all!  That day we made eclairs, paris-brest, divorce, cygne (swans) and gougere.  “You need to practice your piping” was a phrase uttered by Chef at least two dozen times.  A couple of my classmates seem to have natural piping skills, the rest of us were piping turds with tails.  At the end of the day we had a fabulous array of pastries.  All boxed and taken home where they get eaten, sent to work with parents and spouses or shared with neighbors. 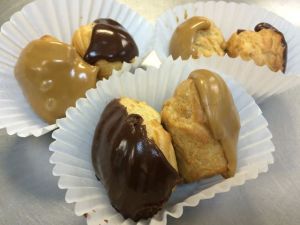 Rolling along, things going so well and then…Snowmageddon 2015.  Class on Tuesday was cancelled.  Our make up class held about a week later, on a Friday, was Classic Doughs = Tarts for days.  These two classes were the first in which we were really doing several components and assembly.  Doughs/batters and then creams, fillings and toppings. Just when I thought I was starting to get things figured out, we went to the next level.  Became clear very quickly that learning to multitask and mind the oven while doing ten other things was a skill I needed now, not later.  That old saying is so true, if you can’t stand the heat get the hell out of the kitchen.  Only big girl pants allowed!  We made two doughs, rolled the doughs, lined tart rings, made pastry cream, Italian meringue, streusel topping and two fillings.

One thought on “Pastry School – Week 3”